Skip to content
Home > Books > Notes from a Small Military 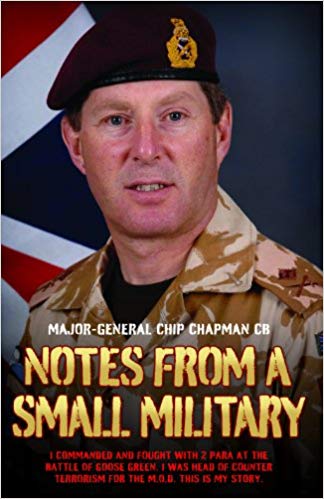 Stumbling from a university anarchist meeting into a career in the army, Chip Chapman is aware of how consciously incompetent he is.

The Royal Military Academy Sandhurst confirms his worst fears. He is eventually let loose on 6 Platoon of 2 PARA and, via the Falklands War, manages to elevate himself to a position of conscious competence and save his career. Snapshots on all aspects of military life, and government decision making, show the military at work and play.

This hilarious, touching, informative and thought-provoking insight into a generation of soldiering in the late 20th century and beyond is set against the drumbeat of the social, cultural, legal and educational rhythms of the age, and the change from the certainties of the Cold War to the nihilism of 9/11. Chip Chapman eventually manages to somehow climb the greasy pole to become a General. With echoes of David Niven’s The Moon’s a Balloon, Lesley Thomas’ Virgin Soldiers and the travelogues of Bill Bryson, Chapman captures the rawness, spirit and fortitude of the soldier and soldiering in both peace and war.

About the Author
Major-General Chip Chapman

Since September 2010, Major-General Chapman has been the Senior British Military Advisor to US Central Command.