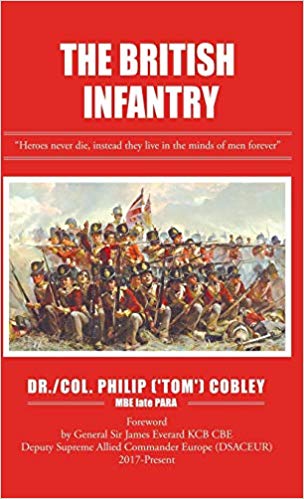 The infantry is “The Arm that wins battles,” to quote Field Marshal Earl Wavell. That assertion is as true today as it was in the 1930’s and it is therefore essential to read the first part of The British Infantry as Dr./Col. Philip (‘Tom’) Cobley brings to life a selection of the campaigns, operations, and battles in which British infantrymen have taken a pivotal role. The author also highlights the essential personal attributes required of an infantry soldier, which include leadership, initiative and tenacity, as well as the tactical and capability attributes required of an effective infantry Arm, as it develops through the ages.

The author’s vivid accounts of infantry combat bring home the point that combat in the front-line is a challenging human dynamic. The challenge being to train infantry soldiers to strike a balance between discipline, based upon self-discipline, while preserving individual initiative and independence, which is so essential in winning wars. A second and more contemporary challenge is how to better prepare infantry soldiers for the dramatic range of emotional responses that a combat environment stimulates. As a result, in the second part of The British Infantry the author explores various initiatives, such as selection and screening, stress management training, combat simulation, and leadership, which he recommends as being the essential elements in lessening the effects of combat stress on individual infantry soldiers.

In conclusion, I encapsulate the ethos of the British infantry as “having an unquenchable will to prevail – whatever the odds.” I consider that a combination of that ethos, when reinforced with individual and collective resilience, mental strength, combat focus, flexibility, adaptability, hardiness, battle-craft and tactical expertise, as being the elements that will create the steel core to an effective warfighting British Army. If this is true, and I believe that it is, then Dr./Col. Philip (‘Tom’) Cobley has added many reinforcing, challenging, and inspiring, perspectives for the present, and future generations of infantry soldiers to assimilate.