Skip to content
Home > Books > After the Final Whistle: The First Rugby World Cup and the First World War 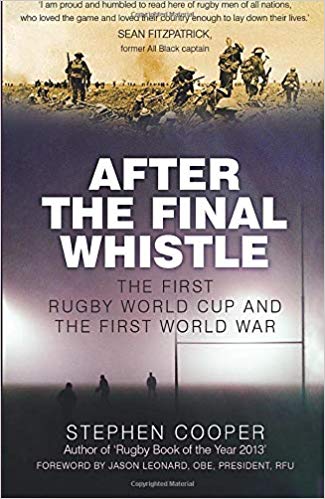 When Britain’s empire went to war in August 1914, rugby players were the first to volunteer: they led from the front and paid a disproportionate price. When the Armistice came after four long years, their war game was over; even as the last echo of the guns of November faded, it was time to play rugby again.

As Allied troops of all nations waited to return home, sports occupied their minds and bodies. In 1919, a grateful Mother Country hosted a rugby tournament for the King’s Cup, to be presented by King George V at Twickenham Stadium. It was a moment of triumph, a celebration of military victory, of Allied unity and of rugby values, moral and physical. This is the story of rugby’s journey through World War I to its first World Cup, and how those values endure today.

About the Author
Stephen Cooper

Stephen Cooper has played and coached rugby for more than 40 years. After Cambridge, he worked in advertising. His book The Final Whistle won Rugby Book of the Year 2013 and was shortlisted for The Times Sports Book of the Year. Jason Leonard is an English former rugby union prop forward.