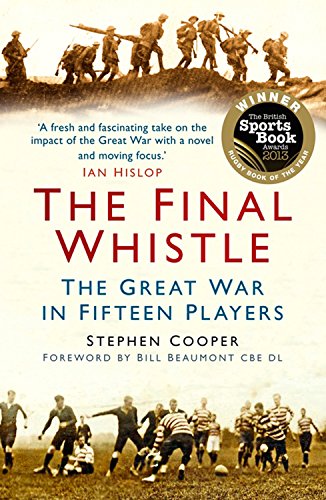 In the years leading up to World War I, the rugby grounds of Britain became training grounds for war. This book plays tribute to the pivotal role rugby played in the Great War by following the poignant stories of 15 men who played for Rosslyn Park, London.

They came from diverse backgrounds, with players from Australia, Ceylon, Columbia, Ireland, and South Africa, but they were united by their love of the game and their courage in the face of war. This history follows them from London to the Western Front, Mesopotamia, Turkey, Italy, and Dublin, through some of the war's fiercest battles. The Final Whistle is a must-read for any rugby enthusiast or World War I historian.

About the Author
Stephen Cooper

Stephen Cooper has played and coached rugby for more than 40 years. After Cambridge, he worked in advertising. His book The Final Whistle won Rugby Book of the Year 2013 and was shortlisted for The Times Sports Book of the Year. Jason Leonard is an English former rugby union prop forward.