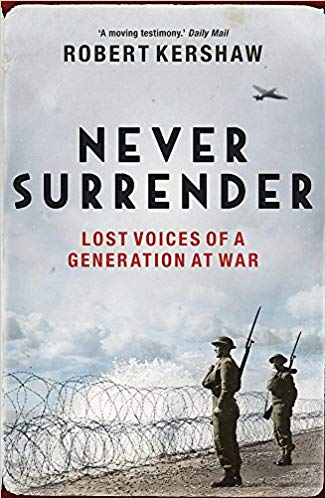 In Never Surrender Robert Kershaw captures the authentic voices of the ordinary heroes of the Second World War, from the soldiers fighting abroad to those battling on the home front, and creates an extraordinary portrait of a generation fighting for survival. Beginning with first-hand accounts of the reaction to Chamberlain's declaration of war in 1939, Kershaw portrays the many aspects of war through the words of those who were there, from the sailors of the little ships of Dunkirk to German soldiers preparing for Operation 'Sea Lion'. He takes us from the nightly horrors of the Blitz to battles in the limitless desert of North Africa, and from jungle war in Burma to Lancaster bombers over Germany and the beaches of Normandy.

Featuring new interviews with veterans and civilians from Britain, the Commonwealth and Germany as well as diaries, letters, and first-hand accounts, this is a testimony to the remarkable men and women who lived through the Second World War - whose refusal to surrender changed them, and Britain, forever.

About the Author
Robert Kershaw

Robert Kershaw, who until recently held a senior position within NATO, joined the Parachute Regiment in 1973 and has served actively in Northern Ireland, Bosnia and the first Gulf War, for which he was awarded the US Bronze Star. He has written four books of military history and has contributed to The Times, the Sunday Times, the Daily Telegraph and the Sunday Telegraph.