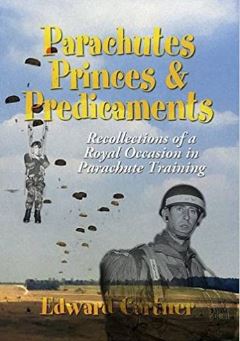 In April 1978 Edward Cartner was serving his fifth tour of duty as an officer at the Royal Air Force’s No.1 Parachute Training School* when it was announced that HRH the Prince of Wales, accompanied by his brother Prince Andrew would be attending to train as military parachutists.

Training personnel to jump out of an aircraft without hurting themselves is a demanding enough occupation under normal circumstances, calling for no less than 100% efficiency, but when your students are the heir to the throne and his younger brother, it adds something a new dimension to the exercise (to say the least!).

As the officer in charge of training the young princes, Edward Cartner immediately realized that he was about to undertake a task that would lead him into uncharted waters (or should that be airspace?) where he would be subject to levels of responsibilty and anxiety well beyond the remit of normal parachute training courses.

His entertaining account of how he and his fellow instructors coped with the difficulties, dramas and dilemmas that occurred during this Royal training course – an unprecedented event in the history of No.1 Parachute Training School – is delivered with the same wry sense of humour he displayed in his previous works for Woodfield I Have Control? and Who Is In Charge Here? and is another thoroughly entertaining look at the perils and pitfalls of being ‘in command’. *Known as ‘PTS’ this RAF unit is responsible for the initial parachute training of all United Kingdom forces – a role it has fulfilled since the first deployment of British parachute troops early in the Second World War. PTS also recruits, trains and is then the sole employer of RAF Parachute Jumping Instructors (PJIs).

About the Author
Edward Cartner

Edward Cartner (b. 1939) was brought up in Northumberland, UK where his father was a policeman in the county. After attending King Edward VI Grammar School in Morpeth he trained as a teacher of English, then Physical Education at Bede College, Durham University and Carnegie College, Leeds. Cartner was commissioned into the Royal Air Force in 1964 where he served until 1993. Eight of his appointments during that time were associated with parachute instructor duties where, in the United Kingdom, the RAF is responsible for all military parachute training.